Push my Daisy, or How I found a new TV show I looove!

"First touch: Life.
Second touch: Dead again, forever."
If I could tell you how much this show made me smile you probably wouldn't believe me. That's okay, let me try:
Where to start? Barry Sonnenfeld's pilot episode for ABC's Pushing Daisies is - and I'm not exaggerating - one of the best hours of television I have ever had the pleasure to experience. Having said that, I am wary of over-hyping what is arguably one of the most hyped about shows. Thankfully the show (or at least the pilot) lives up to its hype. There are so many quotable lines, so many desktop-worthy images, so many heart-warming moments and so many laugh-out loud instances that to list them would be a disservice - because it would mean YOU were watching something else and didn't get enlightened!
The concept: Ned (played by the awkward yet dashing Lee Pace) can touch dead people and bring them back to life... for a minute - or else someone else dies. And if he touches those 'alive again' dead people, they die for good, again... Fate has him 're-enlivening' his childhood crush Chuck. Together they are now finding out who murdered her.
The concept is so 'out-there' it is very much 'in.' It's a bit Tim Burton-ish, a bit Roal Dahl-esque, and in a sense reminds of the 'magical realism' that marked my childhood: characters don't freak out or overanalyse Ned's power, and that in itself makes for a very magical world where symmetry, bright colours and fairy-tales are evoked, invoked and reworked into the very fabric of the world. 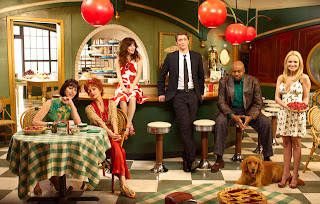 Pushing Daisies isn't just a pleasure to watch (sets, costumes and all other art direction choices are inspired), and it isn't just clever (the dialogue is so awkward and cute it reads like a Jane Espenson Buffy episode) but it is... okay - I will stop over-praising because I feel I've gotten to a part in my review where it feels like I'm losing credibility. So just do yourself a favour and watch this show ;-)

Favourite Part of the Show:
(And now... against what I just said, let me single out certain moments of the episode)
"Only Sleeping Beauty/Only Prince Charming could know how she/he felt" - Every Jim Dale line is quotable. It might be the accent...

"It's like one of those half-heart pendants but with monkeys" - I love that this only makes sense in the Pushing Daisies world.

"I guess dying is as good an excuse as any to start living" - Chuck, we couldn't agree more! Here's to an exciting Season!
Posted by mB at 8:14 PM